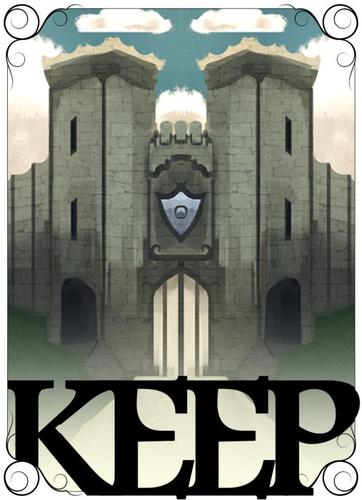 Keep it secret, Keep it safe…

I’ve acquired a number of games over the years from Small Box Games (SBG), brainchild of one-man-show John Clowdus. I backed his card drafter, Keep, when it was on Kickstarter in 2015, and have played it a bunch in the past year. I’m hit-or-miss on drafting games (usually miss), but thought Keep offered some ideas that the others didn’t, and had high expectations for the game.

Keep is one of SBG’s smallest products, with only a rule sheet and 56 linen-finish cards packed in the sturdiest tuck box I’ve seen. Like all from Small Box, it was printed in the USA. Oliver Howe’s artwork is a much quirkier style than typically found in game illustrations, and fits the offbeat theme well. It takes about 15 minutes to play, unless you’ve got slowpokes.

It should retail at $15, but like most of the SBG line, is out of print. This is a frequent gripe for fans, as Clowdus produces small runs that sell out quickly, and he doesn’t always plan reprints. They’re also sold exclusively through Kickstarter or the SBG website, so “retail” may be a bit of a misnomer to some. Hey, it’s his show. If you don’t like his business model, start your own company. 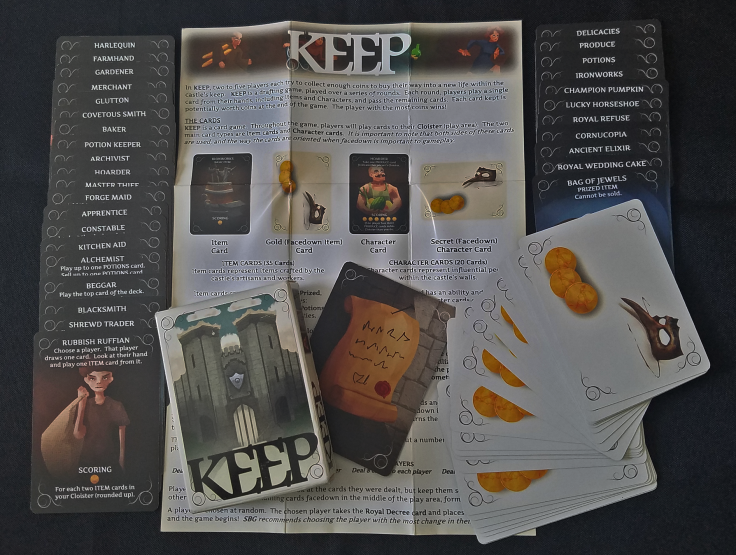 Items are always worth points on their own, and may often be sold or used in combination with other cards to earn bonuses. There are basic items like Delicacies and Potions, and prized items that score more points, like the Lucky Horseshoe, or count as multiple types, such as the Cornucopia.

Characters provide special actions and/or end-game scoring bonuses, depending on how they are played. Some actions include selling items for extra coins, copying the action of another character in play, and stealing items from other players. Characters’ scoring bonuses are usually for collections of items, having pluralities in card types, or the general game state.

Each player starts with one face down character, to help guide their game strategy, and a hand of cards. One player takes the Royal Decree card, which determines start player for each round, and reminds players what end-of-round upkeep to perform.

On a player’s turn, he plays one card from his hand, and performs any action that may be required. The player to his left then takes a turn. If a player has no face up characters at the start of a turn, he may also flip one face up from his cloister and perform its special action (but does not discard the character from his cloister – this is kind of an awkward rule that will throw players until they are used to the game). 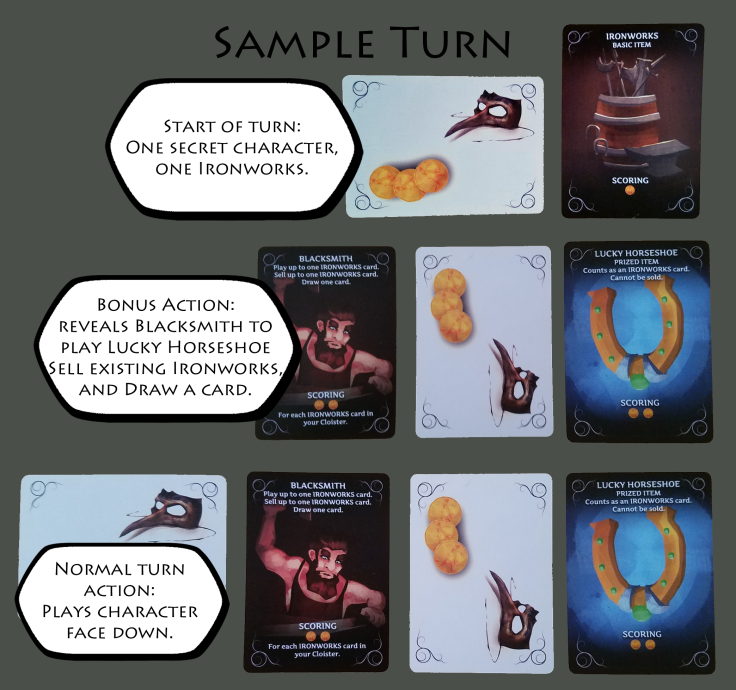 After all players have had a turn in the round, all hands of cards are passed left. The Royal Decree is part of the hand of the player who started with it, and is passed with that hand. The game ends when any player runs out of cards. At that time, all face down characters are revealed, and scores are calculated. 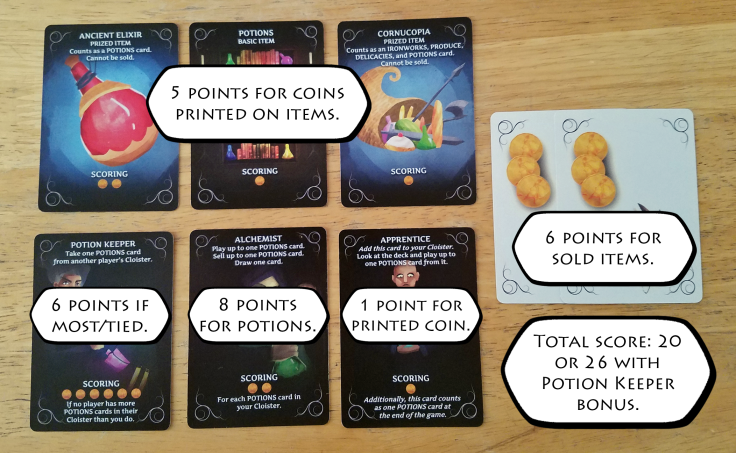 Even though Keep is a drafting game, it differs from others in a few ways.

The most noticeable difference is that players in drafting games usually take their turns simultaneously. This is primarily done to speed the game along and eliminate downtime between players’ turns. An unintended side effect, however, is that simultaneous drafting games don’t encourage socialization with other players. Unless one player is much slower than the others, these types of games often fall into quick, banterless cycles of select-play-pass-reveal.

If a player across the table isn’t getting cards directly from you, you don’t have time to talk to them, and you can’t directly impact their position, are you even playing with them at all? Keep avoids this (potential) pitfall. It’s a quick game anyway, so it doesn’t need to rush through gameplay.

Keep’s non-simultaneous play influences strategy differently as well. Players can make decisions in part based on turn order, which helps control some of the chaos inherent in simultaneous-selection games. Instead of playing and determining what to pass semi-blindly, players in Keep can see what some of the other players are doing, and plan their turns more clearly. If you have the Royal Decree, which allows its owner to choose going first or last in the round, or are just paying adequate attention to the cards being passed, you might be able to manipulate this in your favor, either offensively or defensively.

Another big difference is that Keep also has a certain amount of “take that” in the game, which I haven’t seen in most other drafting games. About a third of the characters allow you to steal something from another player, and many of the scoring bonuses are designed in ways that foster semi-competition. Being able to interfere with others might be a turn off for some gamers, but adds more active interaction, instead of just “hate drafting” the cards you don’t want to pass them. 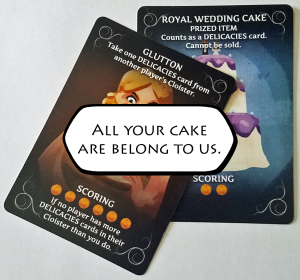 The main flaws with Keep, which are common among SBG games, is that it can be fiddly and there are wonky phrasings in the rules and on the cards. This is often the sign of not enough blind or out-of-house playtesting. Be prepared for a few learning games with new players, and some relearning ones with those who haven’t played recently.

Consider the Hoarder character. At the end of the game, he counts as a Produce card, but not an item. When he’s played for his ability, he gets placed in your cloister, instead of being discarded like most characters are. If you play him before you’ve flipped up a secret character this game, you won’t have the chance to reveal the secret character for its action. Oops.

Player count variants are a potential hiccup here too. Having different hand sizes for player count is fine, but there are tangible modifications in how games of Keep are played.

In two player games, players play two cards per turn instead of one, and draw a card each turn (there is no draw step in other counts).

With five, there is a special setup round where everyone plays two cards, passes their hand, and then draws one card. There are no more double-play phases and no more draw phases.

Players should try to play their first games with three or four players, as there are no rules tweaks – just regular turns.

Some of the smaller stumbles are: 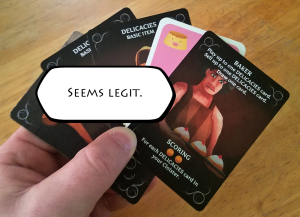 Keep is drafting game that offers more than just card drafting. There are more things to do, and more direct interaction. The rules should be simple, but are hard to grasp, and not just because of the way they’re written. You can go entire games without anyone having a chance to sell anything, and cards will refer to items or types that never enter play. It’s confusing for rookies.

The scoring system offers enough variety that players can try for different paths to victory, but enough overlap that they can’t ignore what their opponents are doing. If I start with the Farmhand, and can play the Gardener, I’m in good shape to pursue a Produce strategy. If you’re working on the Hoarder (the other Produce-centric character) one of us is going to be miffed.

It’s fun that some of the cards offer scoring in concrete values, but others are relative to the other players and how that particular game plays out. Two sessions will feel similar, but not the same.

You’ll definitely feel some tension as the cards you want/need/would mortgage your soul for slowly disappear from reach. You’ll furrow your brow trying to suss out what face down characters your opponents are hiding. Do the characters help them more than they hurt you? What are the chances another player has the one card that would fit perfectly in your cloister, and would that cripple your plan, or can you work around it?

Keep is about choices and interaction. It’s about playing a game with your friends, not sitting in a circle playing against the game itself. There are not many cards used in a game, but a lot is accomplished, and there’s a feeling of building towards a goal. Your goal might shift once or twice, but you’ll be able to make something work. But will it work well enough to earn you the win?