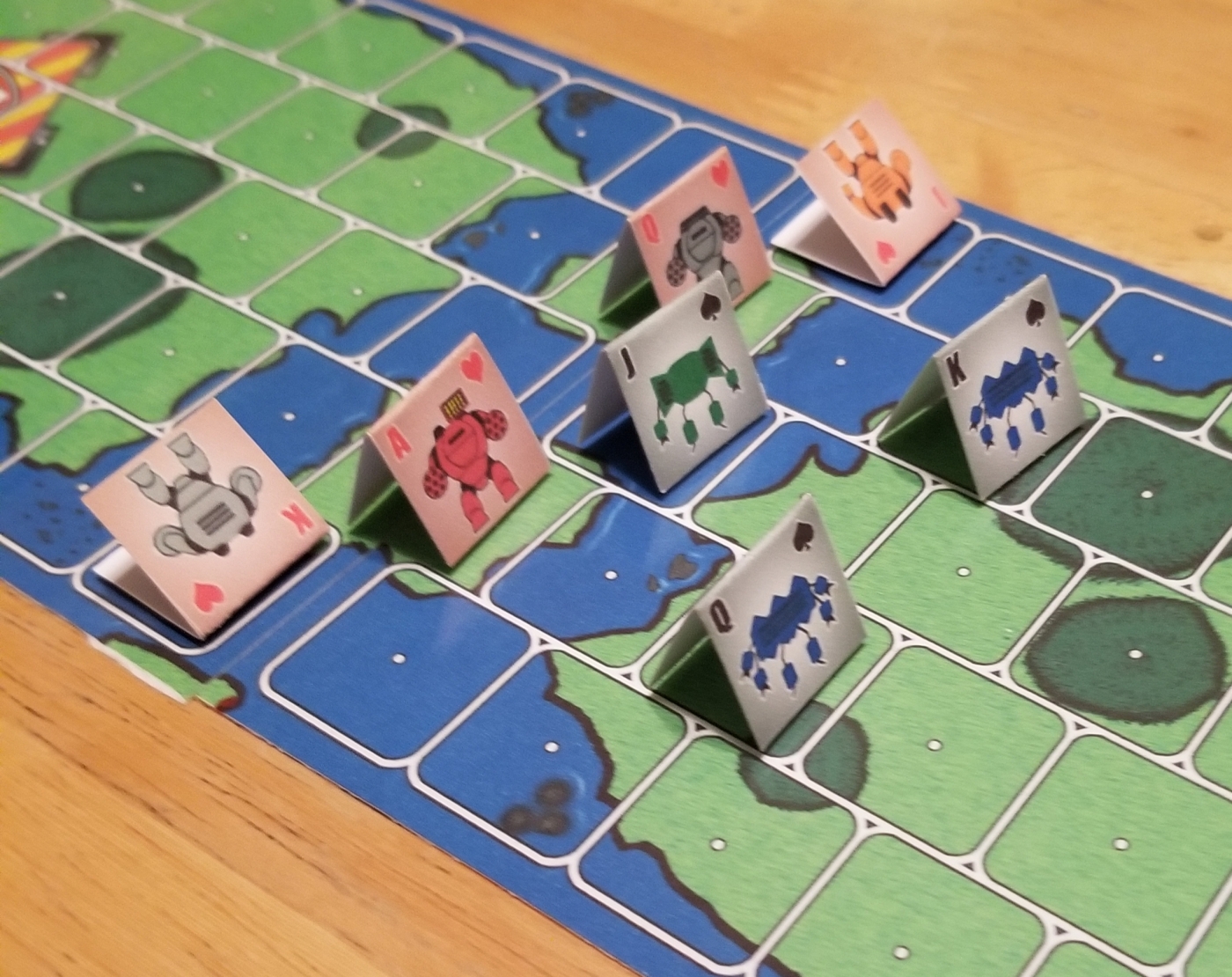 You can buy a print-and-play copy of The Noisavni Invasion here on WargameVault.

I’ve been playing a lot of hex and counter war games in the past year or so. Nothing terribly complex, and not necessarily glossy productions from the biggest companies. Sometimes publishers tuck a few postcard games into the package – mini-games printed
on single postcards. There’s usually a small map, a handful of tokens to cut out, and rules on the back in *tiny* print. You need to provide your own playing cards or dice to make the relatively simple game mechanisms work. People might look at them like fun diversions, but don’t really take them seriously. That’s ok because they’re not meant to be that serious. But what if one was?

Could I make a legitimate game that would fit entirely on a 4×6 postcard? Could I include things like zone of control, supporting fire, movement allowances, terrain, and units in cover in such a limited space? It turns out that yes, I could – but then my postcard experiment took on a life of its own.

I had been on hiatus from game design projects, but the idea of a proper wargame fitting in such a small format intrigued me. I set out on a design challenge to ease myself back into the swing of things.

My requirements were that the game had to:

I thought at best I’d sell uncut postcards for a buck or two, or maybe just use them as promotional giveaways for my website or other game designs. Either way, I wasn’t looking to spend a lot of money on this project. A game needs art, so I hired the only artist I could squeeze into the budget… me!

I am not an artist, nor do I pretend to be. But surely I could come up with something good for a small project. I had some characters from an unpublished webcomic about these stupid, bug-eyed alien robots trying and failing to conquer the world.

I ripped “Bug,” “King Gearbox,” and “Copa” out of the comic, and they went over well as units for the prototype. I cleaned them up, fleshed them out some more, and drew some more humanoid opponents. Alien mecha? I had a theme! I was now working on “Postcards from Outer Space!”

The next issue I ran into was size. A map that fits on a 4×6 postcard doesn’t give much room to maneuver. I like maneuvering in my games. I could either violate the challenge’s rules by creating a physically bigger map or do something to create the illusion of more space. 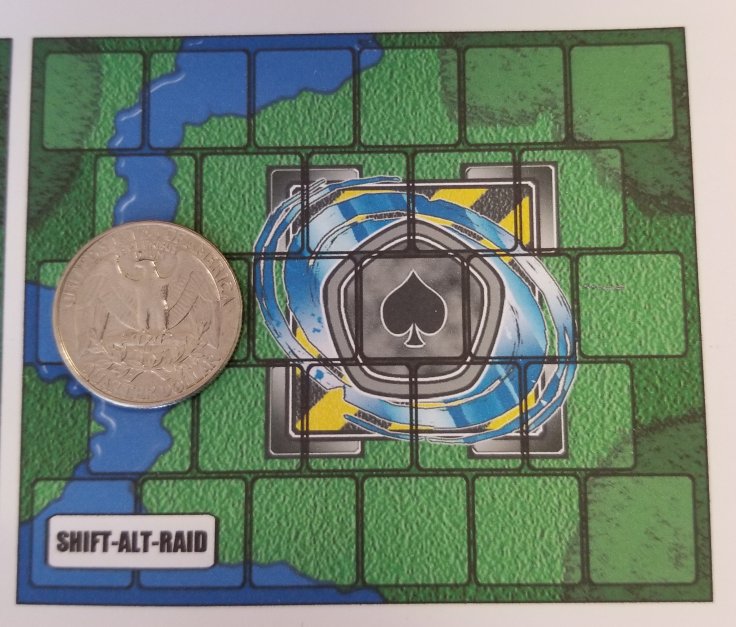 I stumbled upon the idea of making two maps representing separate dimensions, almost as if they were stacked on top of each other like multi-level chess. Units could “shift” from one map space to the space in the same relative position on the other map. Instead of worrying about the six spaces adjacent to a unit, players had to consider a seventh space directly “above” the unit, and the spaces adjacent to that one.

This opened up a tremendous amount of decision space for the players, as they would have to think in 3D. Units on opposite maps could be effectively closer than ones staring each other down across an open area. Now we were working on “Postcards from Another Dimension!”

The problem was, it was a little tricky to keep track of which spaces lined up between maps. The keep-it-on-a-postcard size limitation worked in my favor here, but I needed a visual way to help players reconcile between the two dimensions. 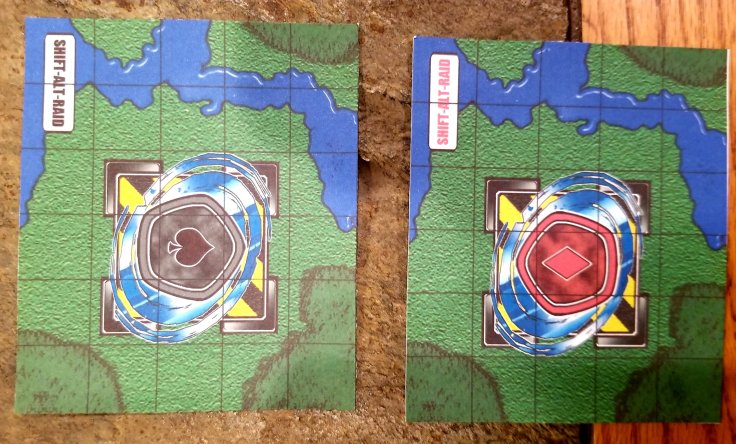 Now we weren’t just dealing with separate dimensions, they were mirrored dimensions. Might as well make the units mirrored as well. Symmetrical units meant fewer rules and easier gameplay balance. Where’s Evil Spock with the goatee?!

III: Under the Hood – Activations

My “additional components” limitation meant it was a-ok to use a standard deck of playing cards. Breaking down the aspects of a deck, I could use suits, ranks, colors. Evens and odds. Number ranges. I could divide the decks into smaller portions. It gave a lot of options, and I ended up splitting the deck into two smaller ones: a 10-card Turn Deck and a 42-card Battle Deck.

The Turn Deck came about because I didn’t want to use a normal I-Go-You-Go alternating turn system. I wanted units to be able to react to the opponent’s moves, but those sorts of systems are too rules-intensive and would need status markers to tell you when a unit had opened fire or done something. I didn’t have the real estate write that all out or to include status markers on my postcard.

A chit-pull system would let me break the alternating turn cycle, but I wanted to jazz it up. In a standard chit-pull game, each unit or formation has a matching token in a cup. When the token is drawn, that unit activates. I’ve enjoyed some chit-pull systems but wanted more control. My compromise was a “chit-management” system. 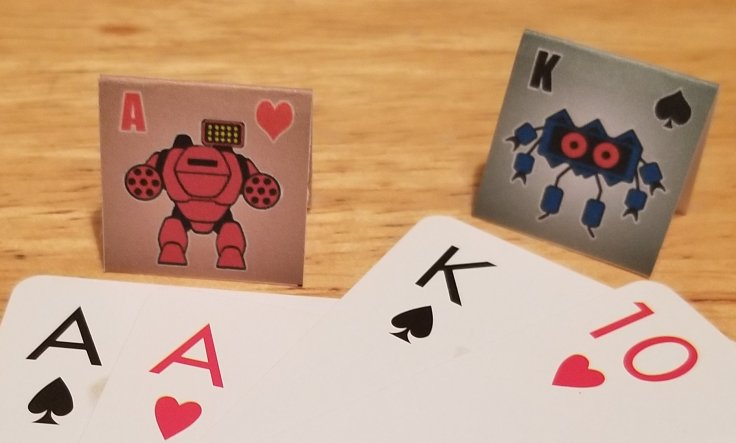 Check out part two of the designer diary here!